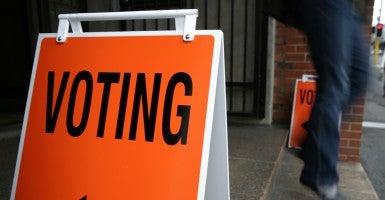 RICHMOND, Va.—Some 308,000 Virginia voters also are registered elsewhere, according to an analysis of 22 states’ election records.

The finding follows a Watchdog.org report that found 44,000 people who appear to be registered in both Virginia and Maryland.

The Virginia Voters Alliance, which reported the results, identified “big gaps” in the voter-registration process.

Reagan George, president of Virginia Voters Alliance, explained how this happens: “Say you move to Kansas and tell the election office there that you were registered in Virginia when you submit your Kansas voter-registration form. If the Kansas election official is bureaucratically lazy or politically motivated, your name never gets removed. The same thing can happen on the Virginia end, and you stay double-registered.”

How many of the 308,000 voters cast multiple ballots in a single election is not known.

But George’s group—working with Election Integrity Maryland—says it found 164 individuals who voted in both states in 2012.

A 2012 study by the Pew Center on the States called voter-registration policies across the country “significantly outdated and plagued with errors.”
“There is no standard procedure to handle voter fraud referrals, so it becomes a low-priority item,” George said. “If Virginia is having trouble convicting people (of voter fraud), maybe the laws need to be changed.”

Don Palmer, secretary of the Virginia State Board of Elections, said efforts are being made to contact Virginia voters who have registered in other states.

“Attempts to contact the identified voters who have registered in other states after their last activity date in Virginia—including registering to vote and voting—at both their current Virginia registration address and their out-of-state registration address are currently under way in accordance with the National Voter Registration Act and Virginia law,” Palmer said.