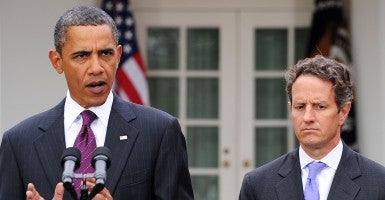 Are conservatives going to allow liberals to rewrite the history of the Great Recession, just as they so successfully did in writing the fictitious account of the Great Depression, which now appears in almost every American history text?

The central message of former Obama Treasury Secretary Tim Geithner in his new book “Stress Test,”  is that the bank bailouts and the Obama stimulus plan saved us from a second Great Depression.  President Obama recites that same line in nearly every speech he delivers.

Actually as Amity Shlaes shows in her classic book “The Forgotten Man,” and Burt Fulsom in “New Deal or Raw Deal” nearly every government regulatory bureau and spending program conceive during the Great Depression only lengthened the misery and disrupted the normal healing powers of a free economy. Eight years after the New Deal was launched, the unemployment rate was still in double digits, and it was not until the start of World War II, when millions of young men were put in military uniform and the nation mobilized for a global war, that the Depression ended.

Which brings us to the Great Recession in 2008 and its aftermath. What is highly inconvenient for apologists for the Obama blitzkrieg of government programs and debt in 2009 and 2010 is that at the start of his presidency, Barack Obama laid out his own counterfactual of what would have happened without the deluge of federal spending and debt.

According to the White House’s own calculations, the economy would have been better off today if the government had done nothing, rather than borrow and spend $6 trillion. The unemployment rate WITHOUT the stimulus was expected to be 5 percent today. Instead it is 6.3 percent and in reality closer to 10 percent.

Another way to put this is that if the labor force had not declined AND we had the 5 percent unemployment rate Mr. Obama says we would have had without the stimulus, there would be at least 10 million more Americans working today.

So, considering we are still 10 million jobs short and $6 trillion further in debt, here is another counterfactual to ponder: How much faster would the economy be growing today if we didn’t have the carrying cost of $6 trillion in debt to contend with? Think if we had used this money to finance a 21st century tax reform or for transitioning Social Security to a fully funded personal account system that has real assets building up each year, not a vault full of IOUs.

All this is important to remember as Geithner takes his faux victory lap around the country patting himself on the back for pulling America out of the financial abyss.

President Obama’s first chief of staff, Rahm Emanuel, let the cat out of the bag in the earliest days of the new administration by saying the president should never let a crisis “go to waste.” This burst of honesty was an admission that the left used the financial crisis as an excuse to do all the things it had wanted to do for years — redistribute trillions of dollars to their voters, reregulate the economy, build massive green energy projects, refinance the Great Society welfare state, rescue the unions with auto bailouts, print money in the trillions, and when the economy fails to perform, blame it all on George W. Bush.

The real story of the financial crisis of 2008 was a massive real estate bubble facilitated by easy money from the Fed, government policies through entities such as Fannie Mae and Freddie Mac that underwrite risky mortgage loans with near 100 percent loan guarantees, a Congress and White House that as Barnie Frank once famously put it “rolled the dice” on the housing market, and private banks, investors and home owners who got caught up in a speculation frenzy.  Then we asked the bad actors such as Barney Frank to fix it. And now we’re repeating all those inane mistakes once more, with government again guaranteeing 90 percent of new mortgages, many with recklessly low down payments.

Here we go again.  When we let the left write the history books, we never ever seem to learn from our mistakes.

A version of this first appeared in Investors Business Daily.