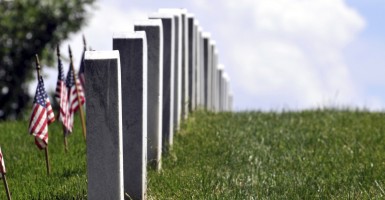 For myself and many other veterans, Memorial Day is encapsulated in one unforgettable experience. That moment for me was while I was still in uniform and teaching at West Point. I took a group of cadets on a study tour of the battlefields at Normandy.

No monument, no poem, no documentary, no tome of history, no soaring rhetoric can ever match the power of the simple crosses to remind us who bears the burden of fighting America’s wars.

The world drew a breath when Reagan, speaking at an anniversary event marking the start of the great crusade to liberate Europe, spoke to a sea of weathered veteran faces and called them “our boys.” For that is what they were — millions in uniform on the land, fighting on the seas, and soaring across the skies. They were our sons (and daughters), our husbands (and wives), fathers, mothers. They were white, Asian, black, Hispanic, Jewish. They were an army of all of us. And they were young.

They are the ones who bore the burden. On Memorial Day we remember that. We remember every member of every generation who gave their lives in service of their country.

Some were drafted. Some were volunteers. Some were brave beyond human understanding. Many were mere mortals who just wanted to serve and go home.

We mourn their loss, but we also celebrate their service — for they shared in common the sacred belief that this was, and remains, a nation worth fighting for.

The very best we can do to honor what they did is to commit ourselves to keep America a country worth fighting — and dying – for.