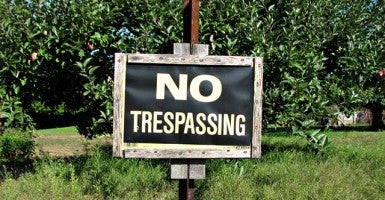 Within our national borders lie all the resources necessary to improve the lives of each American family.

The potential benefits are many: jobs and energy security, lower heating costs in the winter and cooling costs in the summer, better prices for food, clothing — any item, really, that takes energy to produce and needs to be shipped to your neighborhood stores.

More jobs and more affordable food, shelter and clothing are just some examples of the benefits that natural resources such as oil, gas, water, timber, minerals and grazing forage can offer the American family.

Those resources exist, in vast amounts, on the lands locked up in the federal estate. Why are we not making use of them? One reason … your federal government has essentially put a “NO TRESPASSING” sign on most of the land that it manages.

That is not management at all. That is dereliction of duty. The majority of these lands are not parks and were never set aside to be managed as such. Rather, they were supposed to be “lands of many uses.”

America, and Americans, would be better off if these federal lands were returned to the states — allowing them to manage these resources for the benefit of their citizens.

State-based officials are in a far better position than bureaucrats in Washington to make site evaluations and situation-specific decisions about appropriate uses — what works in New Hampshire won’t work in Nevada. And they are certainly capable of using sound science and the latest technologies to make sure environmental and resource-production objectives are done harmoniously.

Some of these lands, such as our great national parks, would certainly be held in trust as places of beauty, respite and recreation. But even these holdings would be better managed than they are now, with state officials supervising maintenance with proper oversight, creativity and best practices.

Other lands, however, should be operated by states under the original “lands of many uses” policies that benefit people. And the American people are, after all, our most important and precious resource.

The vast majority of these lands are located west of the Mississippi River. They are so vast, they account for the majority of acreage within most western states.

There are strong legal arguments being made that federal lands in many western states should be returned to state authority, in keeping with the terms under which they applied for — and accepted — statehood. But, legal arguments aside, the federal government should always pursue policies that are in the best interest of the American people. In this case, that means returning the federal estate to the states.

We the people pay the federal government’s bills. We therefore should reap the benefits of the bountiful resources contained in federal lands.

That’s not happening now. But it can happen, in an organized and coherent manner, if management of those lands is returned to the states.

Wise management includes making the best use of scientific, technological and artistic knowledge. It means understanding that renewable natural resources are resilient and dynamic and respond positively to informed management. We can both benefit from resources now, while conserving them for use by future generations.

Tapping resources to improve people’ lives can be done in a way that minimizes and remediates any negative environmental impact. All Americans — and especially Westerners — deserve the opportunity to have their state officials, Democrat or Republican, take the lead in determining how best to steward the lands owned by the people.

It is time to return the lands of the bloated federal estate to the states and to the people.