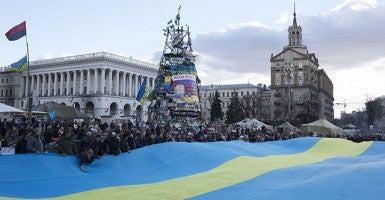 Ukraine is wracked by violence between its soldiers and pro-Russian forces, and the country will hold a presidential election Sunday. We asked Iryna Fedets, a native Ukrainian who is currently at Heritage as Atlas Corps Fellow and visiting senior policy analyst, to give context to the situation.

What has the situation been in Ukraine since Russia took over the Crimea region? Has it remained unstable the whole time?

Iryna Fedets: For the last two months, the situation in Ukraine has been getting more unstable. Some cities of Eastern Ukrainian regions that border Russia have been taken over by pro-Russian separatists that have set up puppet “governors” and “mayors” in the occupied government buildings. Denying the current Ukrainian government, the separatists have been hunting down and killing pro-Ukrainian activists, capturing journalists, robbing local business and citizens and demanding unlawful “taxes” from entrepreneurs.

In response, the Ukrainian army has started an anti-terrorism operation that has already cost Ukrainian regulatory and voluntary troops many lives. Reports from Slovyansk, one of the occupied cities, say that separatists shoot at the Ukrainian army from residential areas. That hinders the army, which doesn’t want to hurt civilians.

The goal of the pro-Russian militants is to disrupt Sunday’s presidential election. They have kidnapped officials of the district election committees, torched down polling stations and threatened voters with explosions.

Fedets: The pro-Russian forces are comprised of Russian mercenaries and Ukrainian separatists. The mercenaries are those with fighting experience who operate in militant groups. One of their leaders is a Russian native who worked in Russian military intelligence and participated in combat operations in Bosnia, Chechnya and Transnistria before coming to Ukraine. He helped take over Crimea and is now trying to seize Ukraine’s Eastern regions. He is a part of self-proclaimed “government” in one of Ukrainian cities.

Local separatists are said to be connected to and supported by the former ruling Party of Regions. And the ease with which some cities were taken over by illegal military groups suggests the corrupt local police, intermingled with politicians, have allowed them to do that. There are also reports of  “Chechen” fighting squads attacking Ukrainian volunteer troops and two Russian journalists have been arrested and charged with assisting terrorists.

It seems like a volatile time to hold a presidential election, especially after it came to light that Russia rigged the “vote” in Crimea to get the result it wanted. Is this a legitimate election?

Fedets: It is a legitimate election. It follows Ukraine’s Constitution and laws. Its purpose is to replace the interim government that took control when the former president fled the country after protests ended up with riot police shooting people.

The date of the election was set by the Central Election Committee in Ukraine in February. In order to ensure a fair vote, an unprecedented number of election monitors–at least 1,000–have been sent to Ukraine by the Organization for Security and Cooperation in Europe.

Yet, not all the citizens in Ukraine will be able to vote safely. Pro-Russian fighters stormed election committees in several cities in the Eastern part of Ukraine, stealing the election materials. Ukrainian Central Election Committee reported a cyber-attack on its servers with the voter data. And for the residents of Crimea, which is occupied by Russia, the only way to vote now is to travel to other parts of the country. Given the anti-Ukrainian policy of the self-proclaimed Crimean government, the people who decide to vote elsewhere cannot be sure that they will be let back into Crimea.

What would be considered a good outcome for the people of Ukraine?

Fedets: Ukrainian army and law enforcement should ensure the safest possible ways for citizens to vote. Currently, the army cannot protect the voting stations adequately because there are massive Russian troops at Ukrainian border, and Ukrainian government doesn’t want to move the army away from the border, fearing invasion.

The newly elected president will face two key challenges: security and sovereignty of the country, and its dangerously bad economic condition. The two are closely related–one of the main points of the separatist rhetoric is that “self-governed” regions will be better off economically.

Ukraine needs long-awaited reforms to fight corruption, bring down barriers for business, develop unbiased and professional system of judiciary and law enforcement. But since the current Constitution doesn’t give the president the full control of the government, he or she will not be in charge of economic policy. The president’s role will be ensuring effective national defense and international relations.

Can you give us an update on what the U.S. is doing at this point–and anything we aren’t that we should be doing?

Fedets: The U.S. condemned Russian aggression in Ukraine from the start. In March and in April, the U.S. Senate and House of Representatives passed bills to provide financial aid to Ukraine. The United States also imposed economic sanctions on Russian companies and politicians close to Putin. And in May, the United States called for sending a monitoring mission for presidential election in Ukraine. The United States should intensify its cooperation with allies within NATO and support NATO Membership Action Plan for countries like Georgia.