Six Things You Can Do to Support Marriage and Freedom 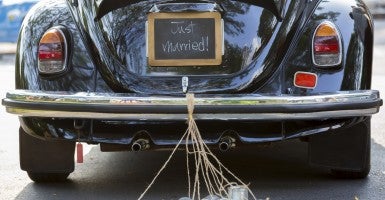 How do we best advance the cause of marriage as the union of a man and woman, husband and wife, father and mother? This week at National Review Online, I laid out an extensive plan of action on how we should work to protect and promote marriage. Below, six takeaways:

1. Stand Up for Our Authority as Citizens to Pass Laws Reflecting the Truth about Marriage

Last summer, when the Supreme Court struck down the federal Defense of Marriage Act, Chief Justice John Roberts emphasized the limits of the majority’s opinion. He made clear that neither the holding nor its logic required redefining state marriage laws. The states remain free—and should continue—to define marriage as the union of one man and one woman.

We must rally in support of our constitutional authority to pass laws defining marriage. We must make clear that court-imposed same-sex marriage via a Roe v. Wade-style decision will not settle the marriage debate any better than it has settled the abortion debate.

2. Defend Our Form of Government and Our Liberties

Whatever happens at the court will cause less damage if we vigorously advance the arguments for a classically liberal form of limited government and highlight the importance of religious liberty. Even if the court were to one day redefine marriage, governmental recognition of same-sex relationships as marriages need not and should not require any third party to recognize a same-sex relationship as a marriage. Protecting religious liberty and the rights of conscience does not infringe on anyone’s sexual freedoms.

Indeed, a form of government respectful of free association, free contracts, free speech and free exercise of religion should protect citizens’ rights to live according to their beliefs about marriage. Although Americans are free to live how we choose, we should not use government to penalize those who think and act differently.

3. Make the Case for Marriage

Religious liberty protections are more likely to be respected if the underlying view about marriage is at least understood. We will be most successful in protecting our rights to free speech, contract, association and exercise of religion if we also make the reasonable case for marriage. Even if the Court or political powers force the redefinition of marriage, much of the future hinges on public opinion.

The key question is whether those who favor marriage redefinition will view—and thus treat—their dissenting fellow citizens as, in the words of Justice Scalia, “enemies of the human race.” Or will they treat us like the pro-life movement? While liberal elites disagree with the pro-life position, they can at least understand it. And they can understand why a pro-life citizen holds the views she does and why government thus shouldn’t coerce citizens into performing or subsidizing abortions.

We therefore must do the work to make our fellow citizens at least understand why we believe what we do about marriage. Even if they continue steadfast in their convictions, they may at least see the reasonableness of ours. For too many of our neighbors, our beliefs about marriage are equated with the late Fred Phelps of Westboro Baptist infamy. If he’s the only voice they’ve heard on the issue, it’s hard to blame them. We must work harder so that they hear our voices.

And yet there are naysayers who claim that rational arguments never convince anyone. There is something perverse in conservatives thinking that ideas have consequences but that good ideas can’t persuade. They can, if only we are willing to present them in a winsome manner. In the long run, truth wins out.

4. Diversify and Strengthen Our Efforts

Truth needs a messenger. We must be bolder, better organized and more strategic, and we must exercise greater foresight when engaging on this issue. We need conservative intellectual force, think tanks, scholars, religious leaders and politicians to actively engage the issue of marriage.

Here we should emulate the success of the free-market movement. In the past half-century, citizens committed to economic freedom put their money where their mouths are and built a network of well-funded free-market think tanks and advocacy groups, university programs and scholarship competitions, media groups and marketing campaigns. While social conservatives have made great strides, we still have a ways to go. We must continue to build a network on social issues.

5. The Church has a Central Role to Play

No matter what, the church will play a central role in shaping opinions on marriage. If it chooses to remain rather silent, it will shape opinion by default. On the other hand, it can rise to the occasion in developing a compelling response to the sexual revolution. And it possesses the only fully satisfying response.

6. We Must All Take the Long View

Consider the pro-life movement in February 1973, just weeks after Roe v. Wade. Public opinion was against it, by a margin of 2:1. With each passing day, another pro-life public figure—Ted Kennedy, Jesse Jackson, Al Gore, Bill Clinton—evolved to embrace abortion on demand. The media kept insisting that all the young people were for abortion rights. Elites ridiculed pro-lifers as being on the wrong side of history. The pro-lifers were aging; their children increasingly against them.

In sum, whatever the law or culture may say, we must commit now to witness to the truths about marriage: that men and women are distinct and complementary, that it takes a man and a woman to bring a child into the world, and that children deserve a chance to grow up with a mom and a dad.

Too many of our neighbors haven’t heard our arguments, and they seem unwilling to respect our rights because they don’t understand what we believe. It’s up to us to change that perception. We will decide which side of history we are on.