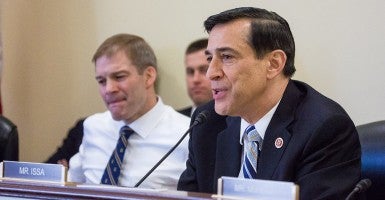 House Republicans looking into targeting of tea party groups by the Internal Revenue Service want to interview a Department of Justice official about his role in pressing the IRS to crack down on such groups just before the 2010 elections.

Issa and Jordan said in a letter to Holder that investigators want to talk next week to Jack Smith, the section head. The request, they said, came after they learned that a Smith deputy met in October 2010 with then-IRS official Lois Lerner at Smith’s direction “to discuss how the IRS could assist in the criminal enforcement of campaign-finance laws against politically active nonprofits.”

The meeting between Lerner and Richard Pilger, director of Justice’s election crimes branch, occurred “two and a half years earlier than previously known,” Issa and Jordan wrote.

Issa is chairman of the House Oversight and Government Reform Committee and Jordan is chairman of its Subcommittee on Economic Growth, Job Creation and Regulatory Affairs.

The full House voted May 7 to find Lerner in contempt of Congress after she twice refused to testify in the congressional probe of the IRS targeting scandal.

Investigators want to know why IRS officials overwhelmingly scrutinized applications for tax-exempt status made by conservative, tea party-affiliated political advocacy groups rather than their liberal or progressive counterparts.

Issa and Jordan wrote to Holder:

The committee’s transcribed interview of Richard Pilger presents further troubling information about [the Department of Justice’s] contemplated prosecution of nonprofit groups for false statements. It is apparent that [Justice] leadership, including Public Integrity Section Chief Jack Smith, was closely involved in engaging with the IRS in [the] wake of Citizens United and political pressure from prominent Democrats to address perceived problems with the decision.

Days after Pilger met with Lerner, the Republican lawmakers write, Lerner spoke Oct. 19, 2010, at Duke University about the political pressure on the IRS to “fix the problem” created by Citizens United before the midterm elections on Nov. 2, 2010. Republicans regained the House majority in those elections, fueled by tea party activism in support of limited government and spending restraint.

Rep. Elijah Cummings of Maryland, the oversight panel’s ranking Democrat, saw it differently than Issa and Jordan. Justice’s interaction with IRS, Cummings said, “was about how to prosecute groups that engaged in criminal activity – not based on their political beliefs.”

In a related development, Issa issued a subpoena earlier this week designed to compel Pilger to answer questions arising out of newly discovered emails between Pilger and Lerner in which they discussed targeting and prosecuting certain applicants for tax-exempt status as suggested by Sen. Sheldon Whitehouse, D-R.I.

Lerner, blamed by many conservative activists for purposeful delays that cost them tens of thousands of dollars in legal and other costs, is now the beneficiary of fundraising efforts by former associates, Roll Call reported.