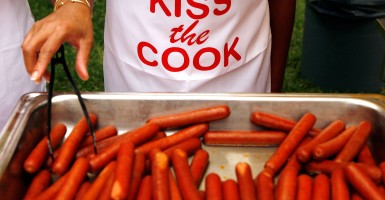 It should be obvious that throwing people in jail for selling hot dogs is profoundly un-American. But in the state of North Carolina, it could happen to you.

In fact, it has already happened. In 2011, a judge sentenced Steven Pruner to 45 days in the custody of Durham County’s sheriff. His sin? Selling dogs from a food cart near Duke University Medical Center.

In case you’re wondering, no, Pruner’s dogs didn’t make anyone sick. But Pruner sold food without a license. And, under North Carolina law, that’s enough to make you a criminal. Pruner was charged with, and convicted of, operating a business without a license. His sentence of 45 days in jail was suspended and he was placed on 12 months of unsupervised probation.

Why do North Carolina’s citizens put up with this nonsense? Most of them probably don’t even know about it. According to a recent issue brief from the Manhattan Institute, entire sections of North Carolina’s regulatory code, even those dealing with public health, “make the violation of any of their provisions criminal.” Worse, certain provisions of the code don’t require individuals to know or understand that their actions are wrong. The fact that most reasonable North Carolinians wouldn’t expect selling hot dogs to be something that the criminal law has anything to say about doesn’t matter.

We’ve written about the explosion of federal criminal laws over the past few decades, and the swelling of the federal register beyond any ordinary citizen’s capacity to make their way through it, let alone understand it. We’ve also written about how many of these laws don’t target activities that are inherently wrong, or require that people be aware that those activities are illegal before they can be punished—even if most reasonable people wouldn’t expect them to be illegal. Such laws make a mockery of the Constitution’s due process guarantees, which, as the U.S. Supreme Court stated in Bouie v. City of Columbia (1964), provide that the criminal law “must give warning of the conduct it makes a crime.” Fair notice was central to the Framers’ understanding of the rule of law.

But it’s important to remember that states can abuse the criminal law as well. The constitutional requirement of fair notice binds government at all levels.

Using the criminal law in this way isn’t just petty and stupid. It’s unjust and quite possibly unconstitutional. The Framers knew better than to allow politicians this kind of leeway to jail citizens. Unlicensed hot dog hawking isn’t something that anyone should have to worry about being locked up for, at least without fair notice that it is a crime. It’s time for North Carolina policymakers to free their states’ frankfurter vendors.