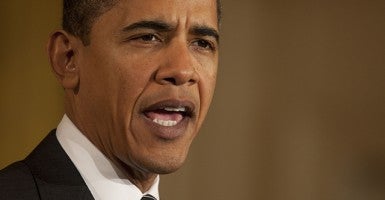 Any day that the Obama administration halts its regulatory overreach is a good day – even if it won’t last forever.

Yesterday, the IRS announced it would hold off until next year on new rules that would have restricted the activities of nonprofit groups. The administration had been working on these behind the scenes since last year. But after the agency’s targeting of conservative groups – based on their ideological leanings – came to light, it caused an uproar.

The announcement by the IRS that it intends to rethink its proposed rules on political activity by advocacy organizations is welcome news. These rules would have severely restricted their First Amendment rights and violated Supreme Court precedent. They were an attempt to implement the “inappropriate criteria” disgraced IRS official Lois Lerner used to target tea party and other conservative organizations.

It’s at least somewhat refreshing that the agency paid attention to a massive outpouring of criticism. Von Spakovsky had noted recently:

By February 27, 2014, the deadline for public comments, the IRS had received more than 150,000 comments—the vast majority of them negative—which is a record number for an IRS rulemaking. In fact, according to IRS Commissioner John Koskinen, this was more than double the number of public comments that the Treasury Department and the IRS had received for all of their “draft proposals over the last seven years.”

Why were people so up in arms? As von Spakovsky said, these rules would institutionalize the types of practices the IRS had been using to target organizations inappropriately – which were violating Americans’ First Amendment rights. True to the administration’s pattern, the rules would have gone beyond the IRS’s authority, as well.

“The IRS should not attempt to regulate in areas beyond its expertise and authority,” von Spakovsky said in his analysis of the proposed rules, noting that the agency “is ill-equipped to take on the role of political arbiter that it seems so eager to assume.”

But be warned: IRS officials said their rewrite is “certainly is not starting over and certainly not starting from scratch,” reports Politico. The new proposal should come out next year, and Americans will have to be ready to defend their freedoms – again.