EPA Administrator Travels in Carbon-Emitting Style, But Says We Shouldn’t 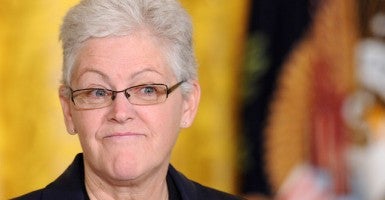 Like most prominent officials in the federal government, Environmental Protection Agency Administrator Gina McCarthy doesn’t own a car but does get chauffeured by a security detail. As if trying to avoid the fiasco former Secretary of Energy Stephen Chu ran into, McCarthy wants us to know she doesn’t hate cars.

“I don’t own a car at this point,” she in a recent interview, “But it doesn’t mean I’m against cars. I don’t want people to think that.”

But actions speak louder than words.

McCarthy has made it clear she’s out to cull some carbon for the planet’s sake. She recently said:

If we don’t start dealing with climate change, which is the biggest public health challenge we face, as well as the biggest economic challenge, and think of it both from an environmental and economic standpoint then I think we’re losing for the next generation and our own, quite frankly.

So, we’re allegedly losing the battle against climate change because people aren’t reducing their carbon footprints at an acceptable rate, and therefore we need to government to do it for us through regulations and mandates. She can talk the talk, but does she walk the walk?

McCarthy may not personally own a car, but she surely is driven around in one. Cars still emit carbon, whether one is driving or riding. She also admits to traveling via airplane quite frequently.

In fact, “A Day In The Life of the EPA Administrator” reveals that McCarthy usually flies home to Boston for the weekends, which, by some estimates, creates a huge carbon footprint ranging from 7.5 tons of carbon dioxide emitted per year to 9.4 tons emitted per year. For comparison, a household of one person, according to the EPA, emits slightly over 10 tons of carbon per year. That’s almost as much as McCarthy emits solely through her travel. Not to mention the carbon emissions of both of her homes, one in D.C. and the other in Boston. Carbon is being emitted all over the place.

Does McCarthy really need to travel so extensively via airplane? Technology today allows people to attend meetings via phone or webcam. That could reduce some dreaded carbon emissions. Moreover, does McCarthy need two houses? After all, houses use a lot of energy. Ultimately, McCarthy could have passed on taking the job of EPA administrator out of commitment to protecting the environment after realizing the job would greatly increase her amount of pollution. But she didn’t.

There is nothing intrinsically wrong with McCarthy being chauffeured around or flying frequently or owning multiple houses. People shouldn’t feel guilty about emitting carbon when traveling or simply by living. But people in positions of power and authority shouldn’t force others into making sacrifices they themselves refuse to make.

Environmental extremists want everyone else to heed what they say, to abide by the dictates of a strict environmentalist dogma and severely reduce, or stop altogether, carbon emissions—except when it comes to their own travel plans. That’s not fair; that’s not right. That’s hypocrisy.