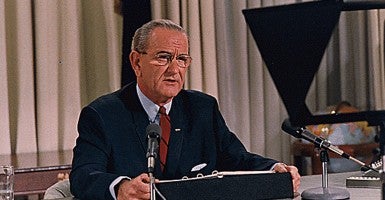 It was 50 years ago today that Lyndon B. Johnson gave his famed “Great Society” speech. His Great Society included a massive system of government programs, with a focus on a “War on Poverty.”

Nearly $22 trillion and roughly 80 welfare programs later, however, society’s ability to prevent poverty has fallen behind.

This doesn’t mean material poverty hasn’t declined. Not even the federal government can spend $22 trillion and have no impact. It is partly because of this spending that America’s poor today are much better off materially than their predecessors five decades ago.

However, while material poverty has declined, Americans are not better off when it comes to self-sufficiency. The percentage of Americans dependent on government has remained virtually unchanged since the 1960s.

The societal protectors against poverty have eroded. Two of the greatest of these are work and marriage. The employment rate among working-age men has declined significantly over the last few decades. American men in their prime (ages 30-49) have dropped out of the labor force since the 1960s, with 12 percent of this group out of the labor force in 2008 compared to only 3 percent in 1968. Even in good economic times, among poor households with children the amount of work is low, with an average of only 16 hours per week.

Also troubling is the erosion of marriage and the subsequent uptick in the number of children born outside marriage. The percentage of children born to single mothers has jumped from under 10 percent in the 1960s to over 40 percent today.

This is tragic, as the No. 1 driver of child poverty is being raised in a single-parent home. Children raised outside of married-parent families are also less likely to thrive down the road – more likely to drop out of high school, abuse drugs, engage in delinquent behaviors, or have a child outside marriage themselves.

The vast majority of unwed births occur to lower-income women and increasingly more so to those in “middle” or working-class America. On the other hand, unwed childbearing is a fairly uncommon phenomenon among the college-educated. Because of this, America is dividing into a two-caste society, split along the lines of marriage and education.

Unfortunately, the federal government has been playing the same hand for decades when it comes to fighting poverty: simply pouring more dollars into more federal programs. It has cost taxpayers $22 trillion, with another $14 trillion projected over the next decade. Even more tragically, this approach has failed the poor, leaving America’s most vulnerable no better able to help themselves than they were in previous decades. If history tells us anything, the government’s anti-poverty method will only continue to produce the same failed results.

To help America’s poor, it is crucial to restore those institutions that have fallen behind over the last 50 years of the Great Society.

It is also crucial to strengthen the institution of marriage. Youth are told practically from birth until graduation not to drop out of high school, but far too many are not given the message of the importance of waiting to have children until after marriage. Every American hears about the health risks of smoking, but very little about the major risks associated with unwed childbearing.

A great society requires a strong foundation. Lyndon B. Johnson’s top-down approach continues its course today, but it is a course that has failed America’s poor. It’s time to refocus efforts on building the institutions of work and marriage, to empower individuals and help them build their dreams.