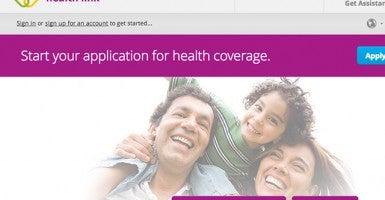 Nevada is the latest state to abandon a glitch-ridden health insurance exchange website set up under Obamacare.

The Silver State Health Insurance Exchange Board, which runs Nevada’s exchange under the Affordable Care Act, announced yesterday it would fire website contractor Xerox Corp. and transfer from the state website, known as Nevada Health Link, to the federal website, HealthCare.gov.

The board stressed the decision did not entirely turn over Nevada’s Obamacare exchange to the federal government. Nevada will continue to oversee plan certifications, insurer rate reviews, health care “navigators,” and Medicaid enrollment, as well as other outreach and marketing for Obamacare.

“The board’s unanimous decision ultimately reflects the exchange’s foremost concern: ensuring that Nevadans receive unfettered access to health insurance coverage,” Steve Fisher, interim executive director for the Nevada exchange, said in a statement. “Additionally, it is the least cost option with the highest probability of success for the 2015 plan year.”

The state contract to Xerox was worth $72 million, but so far the company had been paid roughly $12.3 million for the website, the Las Vegas Review Journal reported.

Xerox spokeswoman Jennifer Wasmer called the board’s decision “extremely disappointing.” “Xerox has been unwavering in its commitment to Nevada Health Link and to getting all aspects of the exchange right,” she said.