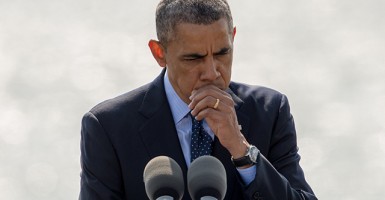 The vast majority of Americans have health coverage through their employers. Thus, during the health reform debate and after Obamacare’s passage, President Obama repeatedly asserted that those with employer coverage wouldn’t be affected at all. Indeed, he said:

[F]or the 85 and 90 percent of Americans who already have health insurance, this thing’s already happened. And their only impact is that their insurance is stronger, better and more secure than it was before. Full stop. That’s it. They don’t have to worry about anything else.

But much like the president’s other promises, this one is badly broken. Claiming that Obamacare doesn’t have an impact on workplace coverage is misleading, because the law directly imposes new benefit mandates and new fees and taxes on those with employer-sponsored coverage — and these have significant consequences.

The law’s imposition of benefit mandates and new taxes will further increase the costs of providing health coverage for employees. The American Health Policy Institute conducted a survey of more than 100 large U.S. employers with 10,000 or more employees and found that these employers anticipate the cost of Obamacare to be between $4,800 to $5,900 per employee, with overall Obamacare-related cost hikes of between $163 million and $200 million per employer. That’s an increase of 4.3 percent in 2016 and 8.4 percent in 2023 above what they would otherwise be spending. The survey concluded that “The total cost of the ACA to all large U.S. employers over the next ten years is estimated to be from $151 billion to $186 billion.”

Many companies will make changes to their health plans to adjust for Obamacare’s implementation and new costs. According to a 2013 Towers Watson survey, when asked how they thought plans would change in the coming five years, 92 percent of respondents anticipated at least modest change, with 47 percent saying they anticipated significant or transformative change.

Some employers have already modified their plans. For instance, the United Parcel Service (UPS) announced last year that it was dropping coverage for spouses of employees, if the spouse is offered coverage through his or her own employer. The delivery company expected this to remove 15,000 working spouses from its health coverage in 2014, for an estimated savings of about $60 million a year. And UPS was clear that Obamacare was a big factor in its decision to change the plan structure. A memo to employees stated: “We are making these changes to, in part, offset cost increases due to the ACA and so that healthcare premiums remain the same for most of our people.” (Page 18 of the memo)

Obamacare is expected to cause many employers to drop coverage entirely. In its latest report, the Congressional Budget Office again projected that in 2016, there will be 7 million fewer people with employment-based coverage as a result of the law.

Other surveys and studies have found similar results. For example, Mercer, a benefits consultant, found in its 2013 survey that within five years, 31 percent of small employers (defined as 10 to 499 employees) believe they will drop health insurance coverage and send their employees to Obamacare’s exchanges. That’s an increase from 22 percent of small employers in the 2012 survey. In addition, a 2012 survey by Deloitte, another consulting firm, found that 9 percent of all employers anticipated dropping coverage in the next one to three years.

Everyone will have a different Obamacare experience, whether it’s loss of coverage, changes to their plan, or higher costs, but to be sure, the president’s promises will not hold true for the vast majority of Americans.