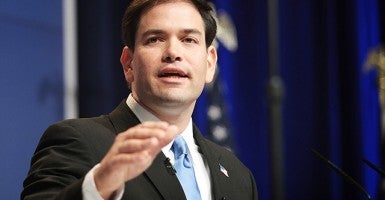 Last week, Sen. Marco Rubio, R-Fla., did something most politicians shy away from completely: He suggested reforming the Social Security program in a sensible way.

Despite the obvious problems, there is a strong “Don’t-Touch-My-Entitlements” camp working to thwart reform. This side’s approach: Do nothing — unless it is to making benefits more generous. If tax increases, particularly on wealthier Americans, were up for discussion, they would quickly come to the table.

Time is on their side. If history is any lesson, waiting until the very last moment to ward off sweeping across-the-board cuts—which is what would happen absent congressional action when the trust fund is exhausted—practically assures a tax increase on some, if not all, Americans.

This is why Rubio’s efforts are so important. Only by acting now can Congress prevent massive benefit cuts for all seniors and excessive taxes on younger people.

It has been more than 30 years since the last time Congress adjusted benefits. For Social Security to be able to provide protection against poverty in old age without putting an undue and economically harmful burden on younger generations, it needs reforms now. Rubio’s efforts to lead on this issue are an important contribution.