Q&A: What Is Going on in Thailand? 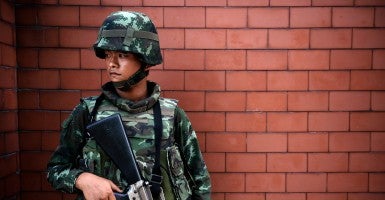 Thailand is in the news for declaring martial law. Why is this happening, and what does it mean for American interests? The Foundry asked Heritage expert Olivia Enos.

The Foundry: What is going on in Thailand? Why are we just suddenly seeing this in the mainstream news?

Olivia Enos: The current situation in Thailand can be attributed to a variety of uncertainties in the Thai political system, including an ineffective coup in 2006, thwarted Thai elections in February 2014, and the recent ousting of former Prime Minister Yingluck Shinawatra.

Thai elections in February 2014 were incomplete and unsuccessful due to ongoing mass anti-government protests that have resulted in 28 deaths and 826 injuries since November 2013. Failed elections and political unrest led the former prime minister to declare a state of emergency.

Government mismanagement and perceived corruption ultimately led to Yingluck’s ousting by the Thai Constitutional Court in early May. In an attempt to fill the leadership void and stem the tide of violence, General Prayuth Chan-Ocha declared martial law on May 19 – effectually granting authority for temporary military rule.

The military has stated its intentions: Martial law was implemented to quell violence, not to instigate a coup. However, it remains to be seen whether the declaration of martial law will actually quell violence or fuel it. Since the declaration of martial law, anti-government protesters have vowed to continue their fight to ultimately unseat the entirety of the caretaker government, including interim Prime Minister Niwatthamrong Boonsongpaisan. If the past is any indication, martial law is unlikely to be the solution.

It seems that so many countries are experiencing unrest right now. Is Thailand’s related to problems elsewhere, or is it contained in that country?

Thailand’s coup should be viewed as unique to Thailand. Coups and political unrest are not uncommon in Thai politics, and current events seem to mirror the unrest of the past.

Past obstructions to democracy should not deter the Thai people from going to the polls and holding a re-election in the near future.

Does this affect U.S. interests in the region? Is the U.S. doing anything?

The U.S. has a number of interests in the region, including excellent military-to-military cooperation with Thailand and the promotion of democracy in ASEAN. Many experts do not believe that the current unrest will upset U.S. relations with Thailand, due to the domestic nature of the conflict.

Current unrest has more to do with Thai domestic politics, however, than it has to do with U.S. interests in the region. This means that active U.S. engagement to defuse the situation is unlikely. Ultimately, resolution will not be achieved unless the Thai people facilitate a peaceful and democratic transition.