Obama Administration Deems Gun Retailers ‘High-Risk,’ Intimidates Banks That Do Business With Them 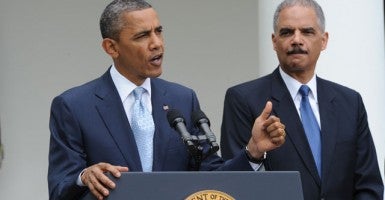 Leave it to the Obama administration to come up with perhaps the most backdoor strategy to date to go after guns.

Operation Choke Point, launched by the Department of Justice in 2013, was initially set up to monitor banks and other financial institutions that handle transactions for payday loan businesses and other online lenders the government considered open to fraudulent activities. What does this have to do with guns?

In other words, if you’re a bank, the government may be breathing down your neck about businesses it deems “high-risk” for fraudulent activity. It may swoop in at any time to open up an investigation into your banking business if its agents “think” one of your clients is engaged in illegal behavior. Why would you take on that client in the first place? It’s much less costly for you to stop dealing with these companies than to submit to investigations and audits.

That means gun shops that offer their products online and use a third-party company such as PayPal to handle credit card transactions are increasingly not worth the risk.

Peter Weinstock, an attorney focusing on investigations of financial institutions, says, “This administration has very clearly told the banking industry which customers they feel represent ‘reputational risk’ to do business with. So financial institutions are reacting to this extraordinary enforcement arsenal by being ultra-conservative in who they do business with: Any companies that engage in any margin of risk as defined by this administration are being dropped.”

Already, gun retailers in Florida, Nevada and Arizona have experienced the fallout of such heavy-handed government tactics – from banks freezing their accounts and refusing to process their credit card transactions to dropping their accounts altogether.

For example, the owner of a firearms training and supply company in Miami received a notice from his local bank saying it was dropping his online business, The Washington Times reports. “Unfortunately your company’s line of business is not commensurate with the industries we work with,” the bank’s notice said.

The National Rifle Association says while it is monitoring the situation closely, it cannot yet substantiate that “the federal government has an official policy of using financial regulators to drive firearm or ammunition companies out of business.” That said, the NRA is “aware of episodes in which banks have severed their relationships with customers in the firearm industry, as well as the policies of various online services – such as Google Shopping, eBay, Craigslist, and PayPal – to refuse to host listings for, or process sales of, firearms or ammunition.”

The NRA is being too nice. Operation Choke Point may be publicly touted as going after the private lending industry, but I would venture to guess the Obama administration hardly sees the results for firearm manufacturers and gun shops as unintentional consequences. It is another case of this administration using its federal power and going around Congress to achieve its ideological goals.