Hensarling’s ‘Choice’: Success Should Depend on Hard Work, Not Friends in Washington 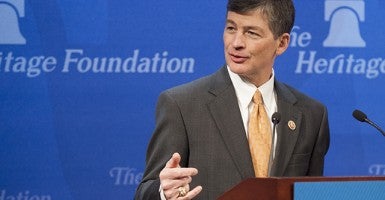 Until conservatives undo a system that grants favors to well-connected business interests, they will lack the “moral authority” to reform a social welfare state that traps too many Americans in poverty and dependence, Rep. Jeb Hensarling (R-Texas) said this afternoon in a speech he bluntly acknowledged as “a call to action.”

In a half-hour address at The Heritage Foundation called “A Time for Choosing,” Hensarling described the need to decide between a “Main Street economy” that thrives on competition among hardworking Americans and a “Washington insider economy” where corruption and cronyism determine winners and losers.

Although he cited half a dozen examples of Washington-engineered unfair play in the economy, the chairman of the House Financial Services Committee spent about a third of his remarks making a case for doing away with the U.S. Export-Import Bank. Unless Congress reauthorizes it, the federal charter of the 80-year-old “Ex-Im Bank” will expire Sept. 30.

Most taxpayers would be surprised to learn that this government-run bank takes their hard-earned money and lends it out to China and Russia – nations that openly challenge our economic and security interests. It also lends their money to oil-rich countries like Saudi Arabia and the United Arab Emirates. It even lends taxpayer money to the likes of Congo, which has a demonstrated history of human rights abuses. I doubt most taxpayers believe this is either wise or fair. …

The real beneficiaries – the true face of Ex-Im – are multi-billion dollar corporations like GE, Ford and, of course, Boeing. That’s because more than 60 percent of Ex-Im’s financing benefited just 10 big corporations last year. …

These multi-billion dollar companies would do just fine without the Ex-Im Bank’s corporate welfare.

Before focusing on the Ex-Im Bank, Hensarling assailed other examples of what he called unfairness in the “insider” economy:

The Texas Republican then devoted more than 35 paragraphs and 1,600 words to demystifying the Export-Import Bank, expected to be the subject of one or more hearings before his committee as expiration of its charter nears:

I have no doubt that an overwhelming number of Democrats will support reauthorization of the Export-Import Bank. They want to allocate credit in our economy as part of a political process. Democrats are always happy to subsidize corporate America as long as they can also regulate and control it.

The smart and fair way to help American exports is with a conservative agenda: fundamental tax reform; strong free trade agreements; a freeze on most regulations; and greater American energy independence with projects like the Keystone pipeline.

Hensarling said ordinary Americans are discouraged and fed up with crony capitalism because it violates their sense of fair play:

Americans in the Main Street economy aren’t looking for or expecting a government bailout. They’re not looking for a subsidy, earmark, tax preference or legislated advantage. No, the good folks of the Main Street competitive economy simply want their success to depend on how hard they work in their hometowns, not who they know in Washington.

Republicans, especially conservatives, have an obligation to restore lost trust, he urged:

This is a call to action for Republicans and conservatives to reject the Washington insider economy and embrace the Main Street competitive economy – its fairness, its empowerment, its morality. And when we do, America’s future will be one of unparalleled freedom, opportunity and growth.