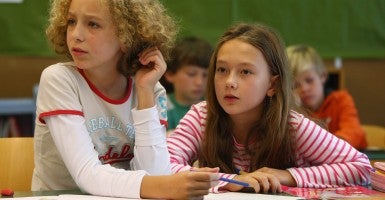 The federal government has been trying to improve educational outcomes for 50 years, but according to a recent study, we have little to show for it — and in some areas, it is getting worse.

This year marks the 50th anniversary of President Lyndon Johnson’s Great Society initiatives, the goal of which was to help low-income Americans move toward self-sufficiency. Among the measures enacted under Johnson’s “War on Poverty” was the first major federal intervention in education: the Elementary and Secondary Education Act (ESEA) of 1965.

The anniversary adds context to this month’s release of the National Assessment for Educational Progress (NAEP) “Report Card,” which detailed the academic achievement levels of high school seniors. The results weren’t promising – which has been true for the last five years the report card assessed and the last 50 years of federal intervention in education.

NAEP provides nationally representative samples of achievement levels of American students and selected demographics, providing an indicator of overall student achievement. The 2013 report revealed that performance in math and reading has stagnated or worsened among America’s 12th grade students and that academic achievement gaps have grown since the last report in 2009.

“[S]tudent achievement at the high school level has been flat in recent years. Just as troubling, achievement gaps among ethnic groups have not narrowed,” said Education Secretary Arne Duncan in response to the report.

Secretary Duncan is right. But these results are not merely indicative of our academic health over the last few years; they’re part of a national trend in educational stagnation that has persisted for the last half-century.

“We have begun a campaign to unlock the full potential of every boy and girl – regardless of his race or his region or his father’s income,” said President Johnson when he signed the ESEA law in 1965. When first enacted, ESEA was 31 pages long and cost $1 billion. By 2002, the seventh reauthorization of ESEA (known as No Child Left Behind) had morphed into a law costing nearly $25 billion annually, containing 60 competitive grant programs and nearly two dozen formula grant programs. Americans have spent $2 trillion on education since the enactment of ESEA.

Considered within that context, the NAEP results are even more troubling.

Federal intervention in education has largely failed to achieve its stated mission of eliminating the achievement gap between low-income students and their peers.

So what do we do?

Where federal intervention has failed, research suggests that school choice has been one of the greatest tools in increasing educational opportunity for all students.

In 2009, Stanford economist Caroline M. Hoxby conducted a multiyear study of New York City charter schools and found that from kindergarten to eighth grade, the students who attended charter schools nearly matched the achievement levels of their peers in suburban communities. She calls this phenomenon the closing of the “Harlem-Scarsdale” achievement gap.

The Washington, D.C., Opportunity Scholarship Program (OSP), which provides vouchers to low-income students in the nation’s capital, has shown impressive improvements in educational attainment. In a random assignment evaluation of the program conducted by University of Arkansas professor Patrick Wolf, more than 91 percent of OSP students graduated from high school. That’s 21 percentage points higher than the graduation rate of a control group of students who applied for a scholarship but did not receive one.

More than 90 percent of OSP students enroll in a two-year or four-year college. And over 92 percent of families in the program are satisfied with their children’s scholarships. It’s a testament to the power of school choice.

President Johnson’s Great Society programs have not delivered the educational opportunity they promised. If Americans hope to see improvements in educational performance, we must look toward policies that empower families, not those that grow federal intervention and a distant, unresponsive bureaucracy.