Education Spending Is Up, Test Scores Aren’t. Who’s to Blame? 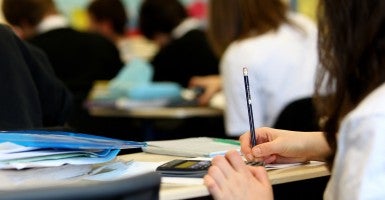 The U.S. Department of Education recently released the 2013 results of math and reading achievement for 12th graders on the National Assessment of Educational Progress. It’s hard to say what’s been achieved.

According to the NAEP—a standardized test often referred to as the nation’s “report card”—just 26 percent of the country’s 12th graders are proficient in math. Only 38 percent are proficient in reading. Those numbers are entirely unchanged since 2009, when the NAEP was last administered.

As education researcher Matthew Ladner notes, 10 points on the NAEP is the equivalent of one grade level of learning, effectively meaning that since 1992, the disparity has increased by half a grade level’s worth of learning.

If academic achievement on the NAEP is any measure, the policies of the past half century just aren’t working.

Since the 1970s alone, inflation-adjusted federal per-pupil spending (part of the goal of which was to narrow achievement gaps) has nearly tripled.

The behemoth federal Department of Education filters all of this taxpayer money through more than 100 federal education programs, many of which are duplicative, most of which are ineffective. It’s no surprise then that this administration’s policies, which seem designed to increase program count and spending, haven’t moved the needle on achievement either.

“Nothing is so permanent as a temporary government program,” quipped Milton Friedman, so getting programs cut or even consolidated at the federal level has been a daunting (and largely unsuccessful) task over the years.

At a minimum, policymakers should infuse a little flexibility into how the roughly $38 billion federal K-12 education budget is spent.

The conservative alternative to No Child Left Behin —the A-PLUS Act—would go a long way toward achieving that goal, by allowing states to put federal education funds toward any lawful education purpose under state law, instead of filtering funding through the labyrinth of federal programs.

States have demonstrated that they are far more effective at catalyzing innovation in education than the bureaucrats who brought you No Child Left Behind and now Common Core.

Let’s allow states to totally opt out of No Child Left Behind, rather than have to navigate the quid pro quo waiver process the Obama administration has established, and direct dollars to their most pressing education needs.

Such an approach could also help to limit the number of non-teaching administrative staff in schools, whose primary purpose is complying with the paperwork burden handed down from the Department of Education. (See the chart above.)

By infusing a little flexibility and innovative in the system, we might actually see the needle move on academic achievement down the road. At the very least, we could trim the bureaucracy and costs associated with manning the 4,200-person Department of Education and employing the attendant state education agency employees.