Thanks to Obamacare, Your Tax Dollars Are Rewarding Failure 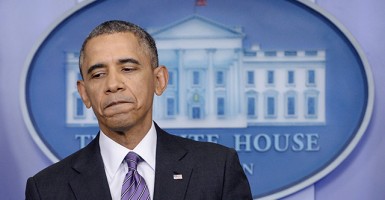 How many tax dollars does it take to run a state health care exchange into the ground?

In the case of three states that have called it quits, Oregon received more than $300 million, Massachusetts $179 million, and Maryland a little more than $171 million. That’s more than $655 million in federal taxpayer-provided money down the drain. And though it already has admitted failure, Massachusetts wants another $120 million to try again.

Worse, this likely is just the tip of the iceberg. State exchanges in Nevada, Hawaii, Vermont and Minnesota are all on life support. To date, federal taxpayers have spent $834 million in a half-dozen states that collectively enrolled 270,000 people. That’s more than $3,000 dollars per enrollee.

According to the Center for Consumer Information and Insurance Oversight, the federal government has awarded more than $5 billion in grants to states to fund their own exchanges. Yes, the same federal government that couldn’t get its own health care website to work figured it might as well double down by giving states dollars to also create websites, exchanges and more bureaucracy.

Not one person during the 2014 enrollment period was registered successfully online via Oregon’s exchange. That’s right, Cover Oregon, at $305 million the third-most-expensive state-based exchange in the country, couldn’t figure out how to register one person via its website.

And does anyone truly believe Hawaii would have spent almost $25,000 per enrollee who signed up during the first enrollment period if the state had been using its own dollars, rather than those from Washington? Amazing how much money people are willing to “invest” in seeing what works, or doesn’t, when they are doing so with other people’s money.

And then there is the story this week of the CEO of Connect for Health Colorado, who received a $14,000 bonus and “cost of living” raise, despite the fact the state’s exchange has not hit its targets to reach financial sustainability, consistently has fought against an audit showing how it used taxpayer funds and is now proposing the $13 million in user fees it will need to collect to pay future bills (read: when federal taxpayer dollars run out), will be collected in part from Coloradans who don’t get insurance through the exchange.

One of the members of Colorado’s exchange finance committee, Dr. Mike Fallon, who supported the raise, explained it this way: “When you look at the hundreds of millions of dollars being thrown away on exchanges that have failed…what we’re spending on this is a very reasonable investment.”

In other words, the Colorado exchange director should be rewarded for not having failed as spectacularly as others.

Only in government do failure and incompetency result in bonuses, raises and more of other people’s money to try again.