The New ‘Godzilla’ Is Science Fiction — and Climate Fiction 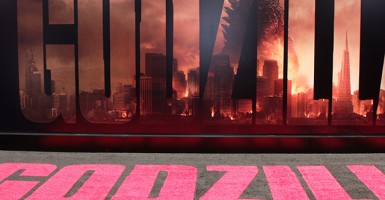 A genre of film is emerging in the movie industry: climate fiction, or, “cli-fi” for short. It plays on fears and anxieties (and myths, quite frankly) about drastic climate change caused primarily by humans. The “Godzilla” remake that opens in theaters today should give people a sense of what cli-fi is all about: climate change hyperbole designed to make a buck at the box office.

A.O. Scott wrote a review of “Godzilla” for The New York Times explaining that in the film, the “focus of global anxiety has shifted from nuclear annihilation to climate change and related problems.” Scott notes that there’s a certain overtone throughout the movie that “we’ve made a big mess of things with our missiles and our power plants, but Godzilla is nature’s way of restoring balance.”

Great. Cli-fi is a purveyor of climate change propaganda. However, the sweet irony in the cinematic genre of cli-fi is that the name reveals an underlying truth: The sensationalism surrounding climate change is simply fiction.

But what’s really interesting is that cli-fi isn’t solely created in Hollywood – it’s produced in Washington, too.

President Obama recently relayed to the world at the release of the National Climate Assessment (NCA) report that climate change is no longer something that will take place in the future; it’s happening right now. He said:

This [climate change] is a problem that is affecting Americans right now…Whether it means increased flooding, greater vulnerability to drought, more severe wildfires — all these things are having an impact on Americans as we speak.

Obama’s claims are bold, but the rhetoric isn’t matching reality. While some of those natural disasters are happening, that doesn’t automatically mean humans emitting C02 are solely culpable.

In a recent fact-checking piece, Heritage’s David Kreutzer pointed out some of the fallacies in the NCA report. For instance, the report claims that precipitation patterns are changing. Kreutzer rebuts that:

Precipitation patterns were never constant. Creating a crisis from the normal allows climate catastrophists to point to every abnormal bit of wet or dry as being “consistent with models” that predict one horrible outcome or another.

Another myth posited by the NCA and echoed by Obama is that the frequency and intensity of inclement weather events are increasing. But Kreutzer suggests this isn’t so:

The latest report on the science from The Intergovernmental Panel on Climate Change and analysis provided by the administration’s own National Climatic Data Center conclude that there isn’t a case for extreme weather increases – no significant trends for floods, droughts, hurricanes or tornadoes.

Climate change can’t be blamed for everything. Ultimately, the president is creating his own type of cli-fi. But while going to a cli-fi movie will cost a person few bucks at the box office, the costs to taxpayers incurred by Obama’s ineffective plans to “fix” climate change are much pricier. We’re talking billions of dollars in increased regulatory burdens for businesses, which translate into higher costs for consumers.

Let’s keep cli-fi in Hollywood and out of public policy.