Q&A: Should All Americans Join the Same Retirement Plan as Members of Congress? 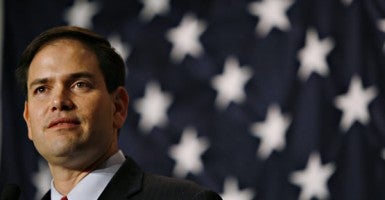 On Tuesday, Sen. Marco Rubio (R-Fla.) proposed several reforms to the nation’s retirement system, including allowing all workers who do not have access to an employer-sponsored retirement plan to participate in the federal Thrift Savings Plan (TSP). A similar idea has been advanced by the Center for American Progress and poses significant risks for competition in the private-sector retirement market.

While Rubio’s effort to improve retirement savings among American workers furthers an important discussion on this national issue, the proposal to expand the size and role of the TSP deserves closer scrutiny.

In short, adding large numbers of people to this plan would simply be a huge government-directed windfall for one company. BlackRock, the largest money manager in terms of worldwide assets, currently manages all four of TSP’s index funds. Even if only one out of 10 eligible workers under Rubio’s plan were to participate in the TSP, it would nearly triple the size of what is already the largest defined-contribution plan in the nation.

What is the Thrift Savings Plan (TSP)?

The TSP is the federal government’s version of a 401(k). It is a defined-contribution retirement plan open to members of Congress, federal employees, and the military. It has several features that make it attractive as a model 401(k), including low fees, automatic enrollment, and simple fund choices. Rubio identified the TSP as “one of the most efficient savings plans in America,” because the fees it charges (.029 percent in 2013) are a fraction of the private-sector mutual fund expense ratio average (0.74 percent in 2012).

Why are the TSP’s costs much lower?

One big reason for the differential in cost is that the TSP is bestowed by Congress and the administration with a number of advantages. It is unusual in size, serving about 4.6 million active and retired participants at the end of 2012. Its administration is also subsidized, because the costs of employee education, administrative processing and collecting are borne by the taxpayer. While these costs do not show up in any direct appropriation from Congress, they are real costs nonetheless. Also, according to the Investment Company Institute, the TPS “enjoys broad relief from the regulations and compliance costs that apply to private-sector plans.” These conditions would give an expanded TSP an unfair advantage over non-governmental alternatives.

How would Sen. Rubio’s proposal affect me?

While details of the plan are still in the works, the proposal is targeting only those workers who do not currently have access to a retirement plan at work. This is about 78 million American workers. The Federal Retirement Thrift Investment Board, which manages the TSP, voiced concerns that a massive expansion of the TSP would dilute its current participant focus and “require a completely different set of operational capabilities.” Who covers the cost of the buildout of capabilities to serve a broader population would need to be established. The proposal would likely work in the same way as the myRA, which President Obama initiated by executive action earlier this year, in that employers would sign up to participate and send their workers’ payroll contributions directly to the TSP.

What are the risks?

The biggest risk is that adding millions of Americans to the TSP would crowd out private-sector retirement accounts. The private-sector retirement industry is very innovative, constantly improving its services at lower costs to employers and employees. Only one company, BlackRock — the largest money manager in the world — manages all of the TSP index funds. Rubio’s proposal could greatly increase BlackRock’s already enormous assets under management. What’s more, an expanded TSP would face a greater risk of seeing its funds diverted towards politically motivated goals, like excluding investments in certain countries, or including “corporate responsibility” and “green” funds.

Is there an alternative?

The Heritage Foundation put forth a proposal that would enable millions of Americans to save in a simple and effective way for their retirement through the Auto-IRA. Unlike a TSP expansion, the Auto-IRA is structured to promote competition with more, not fewer, employer plans. This would give Americans more options – and better options – for retirement savings.