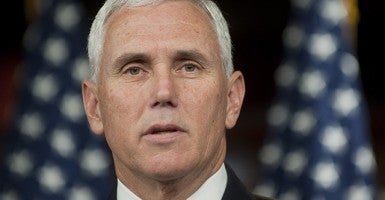 Today, Governor Mike Pence (R) outlined proposed changes to Indiana’s Medicaid program. Based on preliminary materials, it appears that while the state may be advancing consumer-directed reforms in Medicaid, it is also willingly accepting the enhanced federal funding incentive set up under the Affordable Care Act (ACA).

The acceptance of these new federal funds is a dangerous proposition for the state because of three big uncertainties.

In its Frequently Asked Questions document, Indiana estimates “the state cost of expanding [Healthy Indiana Plan, or HIP] between 2015 and 2020 is $1.5 B[illion].” It claims the costs will be “fully funded” through its existing cigarette tax revenue, hospital funding, and the HIP trust fund, if necessary. As with most new government programs, original estimates are likely not the true full cost. Consider the Affordable Care Act — at the beginning, proponents argued that the health care law would fall under the $1 trillion threshold. However, updated estimates show the new law is expected to double the original projection. For Indiana, a detailed analysis and cost projections even beyond the 2020 window would shed more light on its long-term Medicaid costs.

The FAQ document also attempts to dismiss concern over potential funding changes at the federal level by claiming “If either funding source is reduced at any point during the five-year waiver period, the HIP 2.0 will automatically terminate for the new expansion population.” However, legal analysis raises some important questions about whether the state would be able to go back on its promise to new Medicaid recipients. Specifically, these authors point out that “there is substantial possibility that a court could find that the Secretary of Health and Human Services has the legal authority to condition first-dollar federal Medicaid spending on the state’s continuation in the expanded program.”

Some states, like Indiana, are pursuing a Medicaid waiver in which the state negotiates with federal officials to experiment with non-traditional forms of Medicaid as a means to expansion. However, recent analysis raises new questions about this path. The authors point out, “Because Medicaid waivers are temporary, subject to discretion of federal officials and vulnerable to potential judicial reversals, they are unlikely to permit much of the flexibility state policymakers seek.”

According to reports, Indiana’s official waiver proposal will be submitted by the governor to the Department of Health and Human Services by June 30. From there, the governor’s office and officials at HHS will negotiate the final agreement.

The expansion should be rejected. The result of this waiver agreement will have a lasting effect – well beyond this governor’s term in office — on the state of Indiana, Medicaid, and taxpayers.