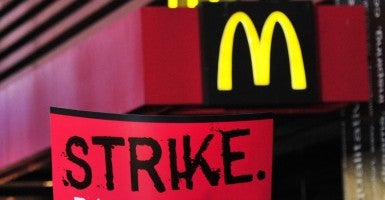 The media have extensively covered global fast food “strikes” today. But very few actual workers participated in #FastFoodStrike. USA Today reports only “hundreds of fast food workers” went on strike – out of 10.6 million U.S. fast food employees. Fewer than 1 in 10,000 workers have joined the protests. So why such buzz?

Because of an extensive – and expensive – PR campaign by the Service Employees International Union (SEIU). The end goal: taking dues from millions of fast food workers. But don’t just take my word for it. An openly socialist magazine called In These Times investigated. It reports that:

The tale being told in the media is one of a spontaneous, worker-led uprising … But three former organizers in Chicago who joined the campaign in late 2011, and two former organizers with NYCC who began petitioning in March 2012, all dispute this story. All say that from the get-go, the stated goal was to organize low-wage or fast-food workers. All say they were told within weeks or months that SEIU was funding the organizing, and all say that it became increasingly clear that SEIU was directing the campaign …

Brooke (not his real name), who was hired by Action Now in December 2011, says that despite close supervision, organizing leaders denied they were in charge: “I was told, ‘It’s all about the workers. We have to leave it up to the workers.’ Then [SEIU leadership] tells the media, ‘It’s spontaneous; the workers came to us.’ It’s duplicitous. It’s to get people to stop asking questions.”

The almost non-existent “strikes” have gotten so much media attention because the SEIU hired expensive PR shops to promote them:

Nationwide, sources say, SEIU has retained the aid of BerlinRosen. The communications firm declined to comment on the record, but Charles (not his real name), a Detroit organizer with knowledge of SEIU strategy, says his impression is that BerlinRosen is “helping in every spot” around the nation, and its work included “local communications, teamwork … advising on communication strategy, generating coverage.” He adds that, in addition to “showing strength to the workers [and] getting the community behind it,” the purpose of the campaign is generating a media buzz. In 2012, combined payments to BerlinRosen from SEIU Healthcare Illinois/Indiana and SEIU headquarters soared to $1.2 million, doubling from 2011 and tripling from 2010.

Why would the SEIU spend millions on this campaign? To get more dues-paying members:

But conversations with various SEIU sources—as well as statements from the leadership and developments in fast-food organizing around the country—indicate SEIU also has a comprehensive national plan in the works, centered on the two public demands of $15-an-hour pay and the right to unionize free of intimidation. If successful, the multi-stage strategy would allow SEIU to secure collective bargaining agreements and gain thousands of new union members.

The whole piece is worth reading – and remembering the next time you read about fast food strikes. Even liberal economists concede that a minimum wage of $15 an hour would cause immense economic harm. But higher wages are not the main point of the “Fight for 15.”