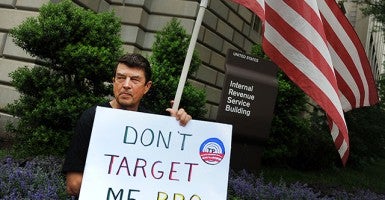 The watchdog group highlighted an email string from nearly two years ago that it says shows IRS targeting of conservative tea party groups for scrutiny “was directed out of the agency’s headquarters in Washington, D.C.”

“These new documents show that officials in the IRS headquarters were responsible for the illegal delays of tea party applications,” Judicial Watch President Tom Fitton said.

The documents were provided in response to a lawsuit Judicial Watch filed in October under the Freedom of Information Act after the IRS failed to respond to its four previous FOIA requests last year.

In an email July 6, 2010, IRS official Holly Paz asks agency lawyer Steven Grodnitzky “to let Cindy and Sharon know how we have been handling tea party applications in the last few months.” Judicial Watch identifies those named as Cindy Thomas, then director of an IRS office in Cincinnati, and Sharon Camarillo, then a senior manager in the Los Angeles office.

EOT is working the Tea Party applications in coordination with Cincy. We are developing a few applications here in D.C. and providing copies of our development letters with the agent to use as examples in the development of their cases. Chip Hull [another lawyer in IRS headquarters] is working these cases in EOT and working with the agent in Cincy, so any communication should include him as well. Because the Tea Party applications are the subject of an SCR [Sensitive Case Report], we cannot resolve any of the cases without coordinating with Rob.

Judicial Watch also details an exchange of emails in February and March 2010 in which an IRS manager in California refers to an application for tax-exempt status from a tea party group that is “currently being held” and requests:

Please let ‘Washington’ know about this potentially embarrassing political case involving a ‘tea party’ organization. Recent media attention to this type of organization indicates to me that this is a ‘high profile’ case.

The House of Representatives last week voted to hold former IRS official Lois Lerner in contempt of Congress after she refused twice to testify before a committee probing the IRS targeting scandal. The House also voted to urge the Department of Justice to name a special counsel to investigate.

The documents released today by Judicial Watch include an April 2013 email from Lerner to internal IRS investigators in which she explains how some advocacy groups could be screened for greater scrutiny.

This a major abuse of power. They covered up for two years and now they say, ‘Hey, dude, two-year-old story.’ So it’s old news. Let’s see if the mainstream media will treat it as old news or what it really  is–new news of misleading America and covering it up.

Judicial Watch said multiple documents from 2012 depict Sen. Carl Levin (D-Mich.) pressing the IRS to “shut down” conservative tax-exempt groups. It cites as particularly “revealing” a 16-page June 2012 letter in which the agency details regulations and policies useful to evaluate groups and subject some to greater scrutiny.

In mid-April, Judicial Watch released a batch of IRS documents revealing that Lerner had communicated with the Department of Justice about the possibility of  criminally prosecuting certain tax-exempt entities.