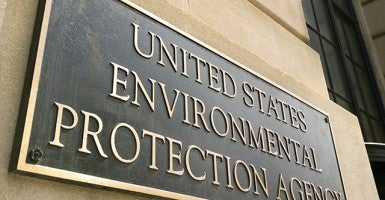 As the Environmental Protection Agency (EPA) moves forward with more stringent ozone regulations, it could be the costliest EPA regulation in history. Senator John Thune (R–SD) wants to make sure that doesn’t happen.

In 2011, President Obama asked then-EPA administrator Lisa Jackson to withdraw the agency’s draft for more stringent National Ambient Air Quality Standards (NAAQS). Although Jackson begrudgingly complied, the EPA moved forward to implement the Bush Administration’s 2008 proposed standards of 75 parts per billion (ppb) of ozone, down from 84 ppb. A ppb is the concentration of ozone in the air over an eight-hour period; for reference, a drop of gasoline in a tanker truck is 1 ppb.

The massive costs of tightening the standard have outweighed the negligible environmental benefits in the past, and enforcing the 75-ppb standard will have diminishing marginal returns—quite possibly to a vanishing point. Even the EPA acknowledged that lowering the ozone standard to 70 ppb would lower asthma and respiratory diseases by only a few tenths of a percent.

But the costs? Many companies would have to implement costly emission-reduction technologies, and a tighter standard could prevent them from expanding and operating. Further, areas of non-attainment of the ozone standard have difficulty attracting businesses.

If the EPA were to implement a 60-ppb standard, the total U.S. attainment costs between 2020 and 2030 would be over $1 trillion—per year. Economist Donald Norman projects that would lead to 7.3 million jobs lost by 2020.

Senator Thune introduced an amendment to energy-efficiency legislation that restricts the EPA from proposing a standard lower than 75 ppb until 85 percent of non-attainment counties in the U.S. achieve full compliance with the existing standard. The legislation itself exceeds the boundaries of the role that the federal government should play in the energy sector with handouts and regulations, but Thune’s bill would help minimize the damage.

Further, Thune’s amendment would require the EPA to consider costs and feasibility and use a model that does not include co-benefits associated with a reduction in ozone. The EPA exaggerates the environmental benefits by including estimated benefits from reducing particulates (“co-benefits”) already covered by existing regulations.

Senator Thune summed it up best, saying, “My amendment would prevent the federal government from placing unrealistic, burdensome, and expensive new standards on job creators and rural communities.”