D.C. Gets a New Obamacare Tax 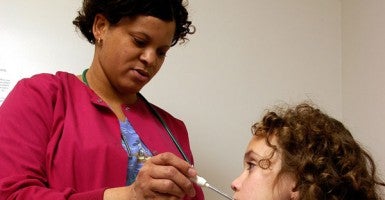 The District of Columbia’s legislative body voted today to give its health exchange the power to tax any health-related insurance product sold in the city.

The D.C. Council, in a unanimous vote, approved the emergency tax measure to help the D.C. Health Benefit Exchange Authority run the online insurance exchange set up under the national health law known as Obamacare, The Washington Post reported.

The D.C. bill, which is subject to congressional review, will add a 1 percent tax on more than $250 million in insurance premiums paid annually by those who work or live in Washington, D.C. The new tax is supposed to help meet D.C. Health Link’s $28 million annual budget.

Mila Kofman, the exchange’s executive director, had called the measure an issue of fairness. “Insurers who benefit and profit—not the taxpayers—should pay,” he argued in a statement.

Opponents such as the American Council of Life Insurers told The Post that the D.C. entity only could tax insurers that are part of its Obamacare exchange.

Edmund Haislmaier, a health policy expert with The Heritage Foundation, told The Foundry that the Affordable Care Act actually gives plenty of leeway to states and the District on how they continue to fund their insurance exchanges.

“While D.C. law could say differently, there is nothing in Obamacare that precludes how the District or states come up with the money they need to keep their exchanges running,” said Haislmaier, a senior research fellow in the think tank’s Center for Health Policy Studies. “They could apply more health premium taxes or even increase their sales taxes.”

After 2015, the District as well as states that elected to set up an online insurance exchange no longer will receive federal grants to maintain their exchange websites or pay “navigators” who assist those shopping for insurance.

For the District, the new tax will be levied on plans for long-term care, dental, vision, hospital indemnity, and other health-related policies.

With states such as  Oregon, Maryland, and Massachusetts struggling to fix  broken Obamacare sites, Haislmaier predicted, funding and sustainability will become a bigger concern for state exchanges:

When they jumped at implementing Obamacare, none of these states could envision the difficulties they encountered” at a time when federal grants were slowing down.”