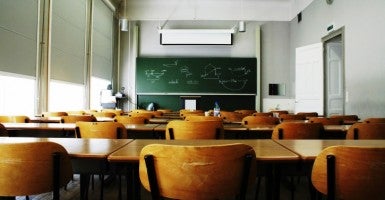 The constitutionality of New Hampshire’s education tax credit program is being considered this week by the state’s supreme court. This is not the first time parental choice in education has been challenged in the Granite State.

The New Hampshire legislature passed the tax credit bill in 2012, overriding a veto by former Governor John Lynch (D). The program allows businesses to receive a tax credit for donating to nonprofits that provide scholarships for students to attend a private school of choice. Students who are eligible to receive a scholarship can use the funds toward private school tuition or homeschooling materials.

In 2013, the American Civil Liberties Union (ACLU) filed for injunctive relief with the Strafford County Superior Court, arguing that the New Hampshire program violates the New Hampshire state constitution. On June 17, 2013, the judge in that case granted the injunction, ruling: “[S]cholarship monies may not go to schools or institutions of any religious sect or denomination within the meaning of the No-Aid Clause.” The State of New Hampshire has appealed the ruling to the New Hampshire Supreme Court.  The Institute for Justice (IJ), which is representing the scholarship families, has commented:

While not binding on the New Hampshire Supreme Court’s interpretation of its own constitution, the 2002 United States Supreme Court case Zelman v. Simmons-Harris is informative. That case held that for the purposes of the First Amendment, government control of funds ends when the money is distributed to the parents since the money reaches a religious institution by way of the parent, not the state. In the case of tax-credit scholarships, money is awarded directly to the parents from private donations, placing the private sector in full control of the scholarship, not violating any constitutional provision—state or otherwise.

The point isn’t that every child should attend a private school; rather, the point is that parents are the first and best educators and should be allowed to make the best decisions for their children. Every child learns differently; that is why choice and competition are so important in education.

Research shows that one of the greatest factors in educational success is parental involvement. Educational opportunity through school choice empowers parents with the ability to choose the best educational option for their children. Whether parents have that opportunity in New Hampshire is what the state supreme court is set to decide.