7 Times Obama Ignored the Law to Impose His Executive Will 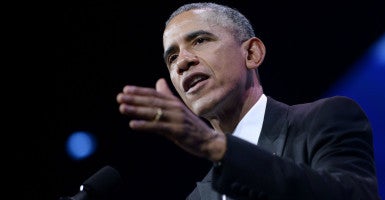 Editor’s note: In the aftermath of the tragic shooting in Umpqua Community College in Oregon, President Barack Obama “is seriously considering circumventing Congress with his executive authority and imposing new background-check requirements for buyers who purchase weapons from high-volume gun dealers,” according to The Washington Post. In 2014, we looked at some of Obama’s past executive actions.

President Obama—the imperial President, the “I’ve got a pen and I’ve got a phone” president who can’t wait to show us his “year of action”—once vowed to do exactly the opposite.

The biggest problems that we’re facing right now have to do with George Bush trying to bring more and more power into the executive branch and not go through Congress at all. And that’s what I intend to reverse when I’m President of the United States of America.

That was candidate Obama back in 2008. This comment somehow slipped under the radar for the past few years and resurfaced this week.

Proving the absurdity of this campaign promise, Heritage’s legal experts have put together a list of seven illegal actions the Obama administration has taken in the president’s unilateral drive for executive power.

If it seems like there should be more than seven, you’re on to something. It’s more complicated than you think to tell what’s illegal or unconstitutional when it comes to presidential power. Heritage’s Elizabeth Slattery and Andrew Kloster explain:

While it might not be possible to define in all instances precisely when an action crosses the line and falls outside the scope of the President’s statutory or constitutional authority, what follows is a list of unilateral actions taken by the Obama Administration that we think do cross that line.

The administration announced that Obamacare won’t be implemented as it was passed, so employers with 50 or more employees don’t have to provide the mandated health coverage for at least another year (and longer if they play their cards right). Slattery and Kloster observe that “The law does not authorize the president to push back the employer mandate’s effective date.”

2. Giving Congress and their staffs special taxpayer-funded subsidies for Obamacare

It was uncomfortable for members of Congress when they realized that, through Obamacare, they had kicked themselves and their staffs out of the taxpayer-funded subsidies they were enjoying for health coverage. But the administration said no problem and gave them new subsidies. In this case, “the administration opted to stretch the law to save Obamacare—at the taxpayers’ expense.”

3. Trying to fulfill the “If you like your plan, you can keep it” promise—after it was broken

When Americans started getting cancellation notices from their insurance companies because Obamacare’s new rules were kicking in, the president’s broken promise was exposed. He tried to fix things by telling insurance companies to go back to old plans that don’t comply with Obamacare—just for one year. Slattery and Kloster note that “The letter announcing this non-enforcement has no basis in law.”

4. Preventing layoff notices from going out just days before the 2012 election

There’s a law that says large employers have to give employees 60 days’ notice before mass layoffs. And layoffs were looming due to federal budget cuts in 2012. But the Obama administration told employers to go against the law and not issue those notices—which would have hit mailboxes just days before the presidential election. The administration “also offered to reimburse those employers at the taxpayers’ expense if challenged for failure to give that notice.”

The welfare reform that President Bill Clinton signed into law in 1996 required that welfare recipients in the Temporary Assistance for Needy Families program work or prepare for work to receive the aid. The Obama administration essentially took out that requirement by offering waivers to states, even though the law expressly states that waivers of the work requirement are not allowed. “Despite [the law’s] unambiguous language, the Obama administration continues to flout the law with its ‘revisionist’ interpretation,” write Slattery and Kloster.

6. Stonewalling an application for storing nuclear waste at Yucca Mountain

Slattery and Kloster explain that “In January 2012, President Obama made four ‘recess’ appointments to the National Labor Relations Board (NLRB) and Consumer Financial Protection Bureau, claiming that, since the Senate was conducting only periodic pro forma sessions, it was not available to confirm those appointees.” The catch: The Senate wasn’t in recess at the time. Courts have since struck down the appointments, but the illegitimate appointees already moved forward some harmful policies.

More: Slattery and Kloster list even more actions that, while they might not be illegal, are definitely abuses of executive power. That list includes imposing new immigration law by executive fiat and refusing to enforce more than one federal law.