The abstinent minority has now become the majority.

Over the last two decades, teens have become more likely to remain sexually abstinent. According to the 2011 National Youth Risk Behavior Survey, 53 percent of high school students have remained abstinent, an increase of 15 percent, and two in three are currently abstinent. 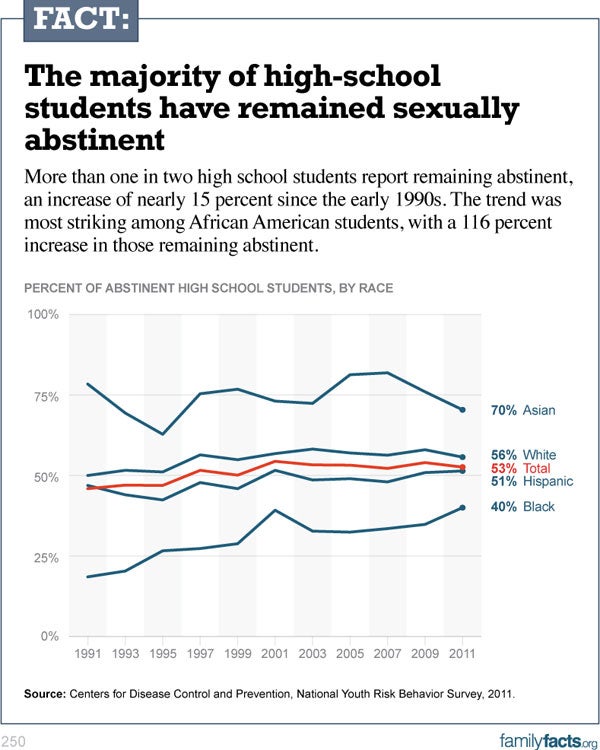 According to a new, definitive two-part report from the National Abstinence Education Association (NAEA), “The Sexual Risk Avoidance (SRA) approach, sometimes called the Abstinence-centered approach, is effective, supported by parents, and is a message more and more teens are adopting in their own lives.”

SRA education is consistent with other public health risk-avoidance models, such as the anti-smoking, anti-drinking, anti-drug, and anti-violence campaigns that have been successful in changing both behavior and culture.

By contrast, the sexual risk reduction (SRR) model, often known as the “comprehensive” approach, “is built on the premise that teens either cannot, or will not, abstain from sex; therefore they must learn to take ‘precautions’ that will decrease their risk of becoming pregnant.”

As the NAEA report notes, this approach is narrow in focus, ignores any meaningful priority on risk avoidance, has been shown to contain medically inaccurate information, normalizes teen sex, undermines the role of parents, and lacks proven effectiveness in the classroom. Furthermore, a systematic review of “effective” SRR programs reveals a number of weaknesses in the research and casts doubt on the broad effectiveness claims made on their behalf.

Polls also show that both teens and parents strongly support the abstinence message. The NAEA report cites a 2010 national study that indicates that “70 percent of parents surveyed are opposed to pre-marital sex both in general and for their adolescents.”

Moreover, the majority of teens themselves are supportive of the abstinence message. Specifically:

Despite the research and parental and teen support for SRA approaches, the Obama Administration has nearly eliminated all federal funding of SRA education; instead, it has created additional programs for contraceptive-centered education, according to the NAEA report, while nearly eliminating support for risk avoidance. In the President’s fiscal year 2013 budget, the funding disparity between SRR and SRA is $37 million to $894.24 million, or 11 to 24.

When it comes to sex education, the debate is ostensibly fought on the grounds of empirical evidence, but it is ultimately one of values.