Family Fact of the Week: Helping Teens to Wait

Fact: According to the latest National Youth Risk Behavior Survey, 53 percent of high school students have remained sexually abstinent. Indeed, in the last two decades, the share of abstinent teens has increased by nearly 15 percent. Moreover, two in three teens are currently abstinent. 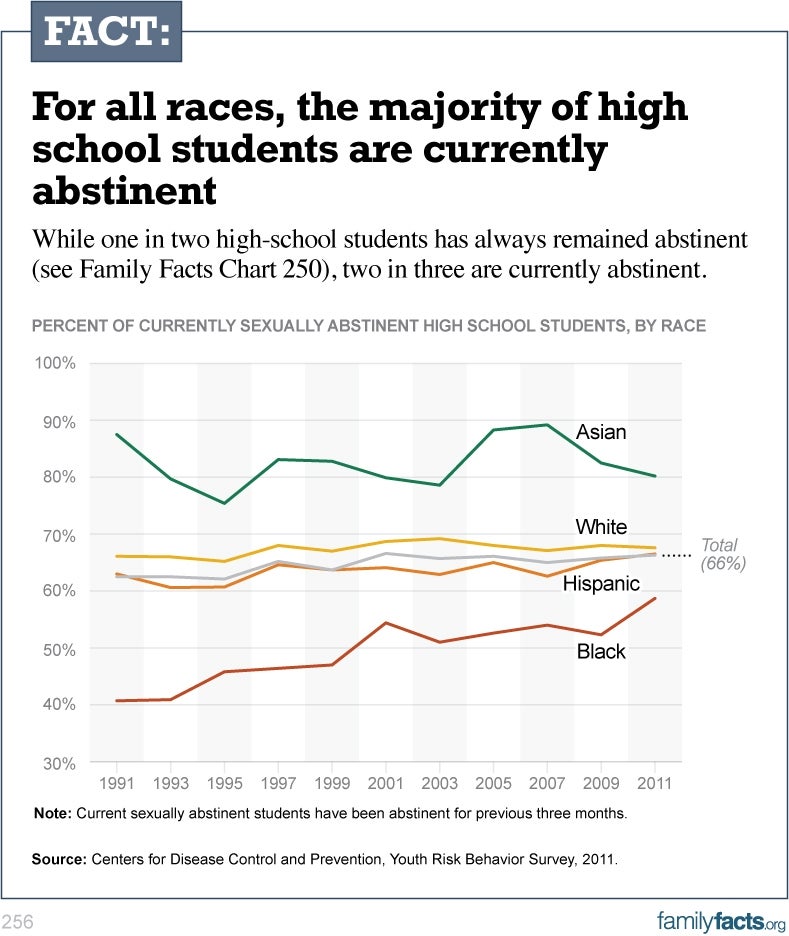 A new study published in the Journal for the Scientific Study of Religion explores the connection between teens’ participation in non-religious activities supported by religious organizations—such as athletic, drama, academic, and service programs but excluding Bible study, Sunday school, and other religious activities—and first sex. It examined over 2,000 teenagers across the nation who were virgins and, on average, 15 years old when they were first surveyed; they were interviewed again three years later.

Specifically, the study finds that participation in such programs was associated with reduced odds of initiating sex, particularly for virgin teens who have engaged in intimate touching. For teens without such experience, those who said faith was important in their daily lives were more likely to have delayed sex. And for all teens, those whose parents attended religious services more frequently were less likely to have initiated sex as well.

Previous research shows that, for teens, attending religious services, participating in religious youth activities, and allowing faith to play an important role in one’s daily life are all linked to reduced sexual activity. The new study adds to accumulating evidence. In particular, it finds that non-religious youth programs supported by religious organizations may help teens navigate tough decisions with a lasting positive impact on their lives.

While some look to government solutions in addressing teen risk behaviors and their consequences, local faith organizations do much every day to serve and meet the specific needs of their communities. And research shows that their solutions bring about effective, positive change.