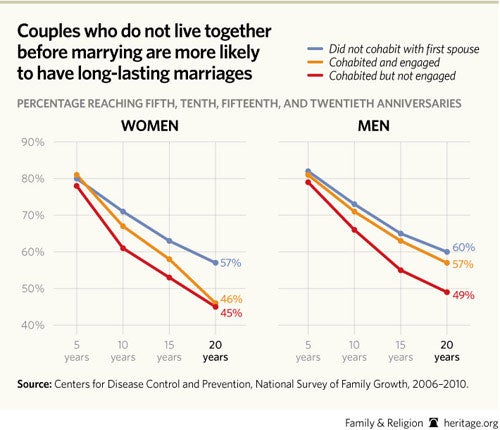 Recent headlines, heralding the findings of a new government study, claim that “living together before marriage no longer predicts divorce” or that cohabitation before marriage poses no greater divorce risk. Regrettably, opting for the provocative rather than the accurate, the media has focused on these findings in a rather misleading way.

The study reveals that premarital cohabitation, regardless of the couple’s intention to marry when they moved in together, was associated with a higher risk of divorce for women specifically. For those who did not cohabit before marrying, the probability of reaching their 20th anniversary is 57 percent. For women who cohabited prior to marrying, the probability drops by more than 10 percentage points.

For men, the picture differs slightly. Men who moved in with their fiancées and those who did not live together with their spouses prior to marrying have similar probabilities of reaching their 20th anniversary—57 percent and 60 percent, respectively. However, for men who cohabited prior to marriage but were not engaged when they moved in together, the probability is 49 percent.

The gender distinction maybe explained by the differences in how women and men perceive the meaning of and motivation for cohabitation, as well as the level of commitment involved. For example, one recent study finds that women are “more likely to understand cohabitation as an intermediary step preceding marriage, and men more likely to perceive it as an alternate path altogether, or at least without an explicit connection to marriage.” Moreover, “women may be motivated to avoid cohabitation because it impedes further commitment while men avoid it because it requires further commitment.” Thus, to say that living together prior to marriage has no impact on marital stability is, at best, misleading.

The study also shows that, continuing recent trends, while marriage rates have declined, cohabitation has increased. Sadly, with increasing levels of cohabitation and subsequent marital decline, more children are born outside of marriage today than at any time in the nation’s history, and over half are to cohabiting couples.

However, children born to cohabiting parents do not receive the same benefits as those born to married parents. And they don’t fare much better financially than children in single-parent homes, meaning they are about five times as likely to be poor as their peers in married-parent homes. Additionally, because cohabitation relationships are more likely to dissolve, children are at an increased risk of experiencing parental breakup and the variety of negative outcomes associated with it.

Much of the marital decline taking place—including higher cohabitation rates and unwed childbearing—is occurring among low- and moderately educated Americans. The strong connection between unwed childbearing and poverty means that these groups with fewer resources are doubly disadvantaged as marriage loses ground and unwed childbearing grows. These trends are creating a “two-caste society” divided along the lines of marriage and education.

The benefits of marriage are manifold for children, adults, and society. Premarital cohabitation does matter in the case of marital stability, particularly for women. More couples cohabiting and fewer marriages mean more children born without the stability and benefits this institution provides. While cohabitation rates continue to increase, the negative outcomes associated with it cannot be dismissed.