The greatest tribute to the legacy of Martin Luther King, Jr., is not to name a street in his honor or celebrate a national holiday. It is to recognize and support those who are working to carry out his vision, those who empower those facing the greatest obstacles through personal relationships that restore the fabric of civil society—without the need for federal government intervention.

As former Housing and Urban Development Secretary Jack Kemp once said, “We need an anti-poverty agenda based on democratic capitalism, not socialism and on private ownership, not government control. Our definition of compassion is not how many people live on the government welfare plantation, but how many of our people are liberated from government dependence.”

Among those ranks of individuals who are carrying out Dr. King’s vision are three young men—Curtis Monroe, Michael Toland, and Roger Marshall—who give their time, talents, and earnings from their day jobs serving as coaches and mentors of at-risk youths in the Benning Terrace public housing development in Washington, D.C.

The investment by this trio of volunteers is, in fact, an act of longstanding gratitude and reciprocity. Two of them grew up in Benning Terrace, and their childhood and adolescence was spent in a war-torn environment in which a familiar face would vanish from the neighborhood nearly every other month as the victim of gang violence.

Fifteen years ago, the lives of Monroe and Toland were salvaged and their futures reclaimed when a cadre of friends who called themselves the Alliance of Concerned Men felt called to intervene after the violence reached a shocking climax: The body of a 12-year-old boy who had been shot execution-style was discovered in a frozen ravine.

The members of the Alliance had at one time been involved with crime, drugs, and violence, but each life had been transformed. Because they were familiar with the day-to-day dangers of life in the inner city and were well-versed in the gang subculture, they readily won the youths’ attention and respect. Through meetings at the Center for Neighborhood Enterprise, they developed a plan of action. They shared information with grassroots counterparts who had successfully worked with gang members in other parts of the country. They also connected with David Gilmore, the D.C. housing director at the time, who saw the potential of the intervention and offered to provide jobs for youths who would lay down their weapons.

Warring gang members seized the opportunity to exit the cycle of violence and willingly took on jobs ranging from graffiti removal to landscaping and building repairs. The neighborhood was transformed from a wasteland into a thriving community. There was not a single gang-related death for the next 10 years.

Today, Monroe, Toland, and Marshall, who experienced that transformation firsthand, are investing in a third generation of Benning Terrace kids. Their coaching goes far beyond how to pass a football or block a defender, as they serve as moral mentors and confidantes. Their investment is critical for the futures of each of the youths they work with.

These volunteers also hold weekly group counseling sessions. At a recent gathering, seven of eight participants reported that their fathers were in jail. Statistics show that adolescents who do not live in intact families are more likely to engage in crime and delinquent activity and risky behavior and are less likely to succeed in school. But Monroe, Toland, and Marshall have refused to relegate the young people of Benning Terrace to the ranks of a “lost generation.” They are available on a 24/7 basis for kids who are in need, and they serve as surrogate big brothers and dads, taking them out for pizza after their football games and going to their schools to consult with their teachers.

These men are rebuilding civil society, demonstrating the concern and care for individuals at a personal level that is most effective in transforming behavior and meeting people’s needs.

They exhibit the power of presence—a sharp contrast to the impersonal efforts of government programs or over-reliance on curfews and cameras. Part of a nationwide network, these dedicated community leaders are proving that it is possible to counter the odds of poverty and disadvantage. Instead of surrendering young people to another cycle of generational poverty and accompanying government dependency, these community healers are demonstrating a realistic neighborhood-based alternative to government intervention. Policymakers should take note of the innovation and success of grassroots efforts like Benning Terrace in addressing the social breakdown that so often causes poverty, crime, and community devastation.

Their investment is truly a powerful, living, and longlasting tribute to the vision and sacrifice of Dr. King.

Robert L. Woodson, Sr., is the founder and president of the Center for Neighborhood Enterprise located in Washington, D.C. The Heritage Foundation works closely with Mr. Woodson and the center on conservative anti-poverty strategy. 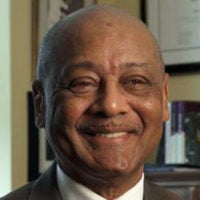