According to a recent Wall Street Journal article citing 2010 data from the U.S. Census Bureau, nearly half (48.5 percent) of America’s population now lives in households that receive some sort of government benefit. That is nearly a 10 percent increase over the middle of the recession in 2008, when that number was 44.4 percent. 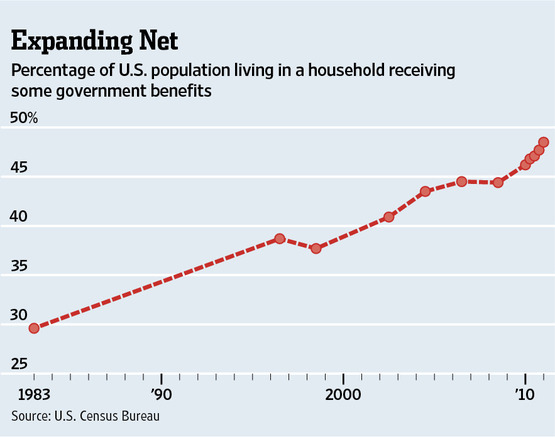 The above graph illustrates the alarming rate at which Americans are becoming more dependent on government. It serves as a nice complement to this graph, showing the explosion of government spending since the “War on Poverty” was declared 47 years ago. Since that time, the steady expansion and implementation of new government welfare programs has cost trillions of dollars.

Unfortunately, government welfare spending shows no sign of slowing down. Means-tested welfare spending is the fastest-growing element of government expenditures, and government spending on welfare is projected to cost taxpayers $10.3 trillion over the next decade. These numbers highlight the urgency of further welfare reform.

Those in favor of comprehensive reform have history on their side. The Republican Congress of 15 years ago demonstrated that welfare reform works. Temporary Assistance for Needy Families (TANF) replaced the failed Aid to Families with Dependent Children (AFDC) program, inserting time limits and work requirements into the largest cash assistance program. Subsequently, millions of Americans left welfare for jobs. Seven years after the reforms were passed, 3.5 million fewer individuals were living in poverty, and employment among the most disadvantaged sections of the population had rapidly increased. However, while the reforms implemented at that time were successful, they were not truly “the end of welfare as we know it.” The 1996 reforms touched just one welfare program, yet the federal government operates more than 70. The successful policies of the1990s have been significantly watered down since that time, and further reform is needed.

Katherine Bradley and Robert Rector have proposed a number of ways to curb the welfare state:

Practical reforms like these will help put the United States back on course financially by promoting the principles of self-reliance and personal responsibility.

Kevin Reagan is currently a member of the Young Leaders Program at The Heritage Foundation. For more information on interning at Heritage, please visit: http://www.heritage.org/about/departments/ylp.cfm