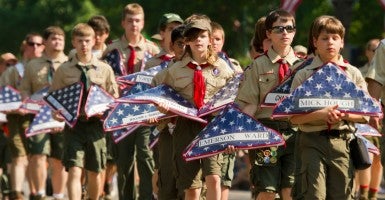 What does Memorial Day really mean? In a special Memorial Day podcast, The Heritage Foundation’s vice president of American Studies, Dr. Matthew Spalding, discusses the historical roots of this day. And below, we share with you a Q&A with Dr. Spalding in which he discusses that history, how Memorial Day came to be, and what it means for America

When did Memorial Day become an official holiday?

Spalding: There’s actually an interesting history to Memorial Day.  On the one hand, there’s nothing unusual about countries historically having a day to celebrate their war dead – which is essentially what Memorial Day is.  Ours really began after the Civil War, around 1866-1867, when veterans from the Civil War on both sides wanted to honor their war dead.  They actually came together in a celebration – originally called Decoration Day – to unite the northerners and the southerners who wanted to honor each others’ dead, because they realized the great sacrifice that was made.  Memorial Day arises out of this unification and recognition of sacrifice after the Civil War, though it was not designated as a federal holiday until the 1970s.  It’s important to remember the history of the day before the holiday was made official.

And the loved ones of those who had died used to congregate in the actual graveyards in the last 1860s, correct?

Spalding: Yes, it was literally a time in which you would go to the graves of the war dead. And if you remember, at that time, a great number of the dead were actually buried at the battlefields – hence the great anniversaries and celebrations that occurred: Gettysburg, Antietam, etc. On the anniversary, you would go to the battlefield itself.  As an example of this tradition, to this day, one of the greatest places where this celebration occurs is at Arlington Cemetery.  The President and the Vice-President still go there and lay a wreath at the Tomb of the Unknown Soldier, which represents all of the American war dead.  You’ll also see soldiers there putting a flag at each individual grave.  We celebrate today with parades and other things, but that’s really where the celebration is.

You’ve touched on our next point:  This day was originally started because of the Civil War, but sometimes it’s easy to forget in our busy lives what exactly we continue to celebrate.

Spalding:  Well, what’s interesting is to think about why, in America, it’s a different sort of celebration.  In other countries, when you read classical accounts of battles, taking your dead off the field is something that is done that is honorable.  But here, it’s slightly different.  And if you really want to get a sense of what this means, the great poet of this subject is Lincoln, both during the war – especially in his speech at Gettysburg, where he talks about how “these dead shall not have died in vain” – but also in his First Inaugural Address, and his other great speeches.  He links the acts of these soldiers (their giving of their lives, this great and honorable sacrifice) to what America is, specifically.  This is evident in the Gettysburg Address, when he says that we cannot consecrate the ground, but that it is for us, the living, to go on and bring about what he calls a “new birth of freedom”.  He connects their virtuous sacrifice to the principles for which they died.

That’s what is really unique about the American understanding of Memorial Day, and that is that it constantly harkens back to our memory of these principles.  So on Memorial Day, we remember these tragic events, and our soldiers’ noble sacrifices and what they have done for us, but it’s really a celebration of our country, and what our country stands for.

What’s important for people to keep in mind about our great country, as we go forth and celebrate?

Spalding: We must remember that this truly is a great celebration.  On the one hand, it is a somber occasion, but what makes it great is remembering why they did it.  That’s the key thing.  For instance, in Lincoln’s First Inaugural Address, he speaks about “the mystic chords of memory”.  And these are the “bonds of our affection”, he says, “stretching from every battle-field, and patriot grave, to every living heart and hearth-stone” across the land.  These things that bind us, that connect us together, tie us back to our beginning – to our principles, and to what makes America great – and that’s what we’re celebrating.  But it’s also a reminder that sometimes, our own citizens, our soldiers, make the highest sacrifice, and that it’s for that honorable cause.